This is the first of many series on machine learning. 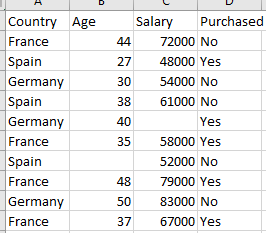 The above dataset shows Country, Age, Salary and Purchased. The field that we need to research is called Dependent field and others are called Independent Field

A dependent field is a whose outcome or value is derived from other fielda. In this example, we are trying to find Whether a customer made a purchase or not. Hence, Purchased here becomes the dependent field. In terms of coordinate, if we map this on the graph then Purchased will be plotted on the y-axis.

Independent fields are values that we observe. Example - If I stand on the side of the freeway and start noting down the color of each car passed, whether it is a car or a truck, is it raining that day or sunny? etc. These values are called Independent fields. In the above datasheet, Country, Age and Salary are independent fields.

There are three essential libraries for most basic machine learning projects. Add the below library

Use panadas to import the file data.csv file

Create the dependent and Independent Variable matrix of features

In the real world when you are handed a dataset. You will find that a lot of data might be missing. Ex - Row 6 Salary is empty and Row 7 Age is missing in our data.csv

As a general rule of thumb mean and median can be applied to numerical values only. It cannot be applied to alphanumeric or String values. This is where we can use Mode or Frequency.

Scikit library in python provides a class called Imputer which helps in fixing the missing values using the above strategies.

The next line imputer = imputer.fit(x[:,1:3]) is telling imputer object on which matrix columns it needs to look for missing value and mark them for filling value as mean

One thing that I wanted to try was that would happen if I just used imputer.fit(x) and did not provide the columns which actually had the missing values. What happens is that since you have marked the strategy as strategy='mean', the imputer will try to take the average/mean of each row country, Age & Salary. Since Country is of type String, python will shit in its pant and complain about it. However, if the Country column was numeric, then this imputer.fit(x) would have worked. Additionally, on the left side we have defined that data be copied into x[:, 1:3]. This is because if you write x = imputer.transform(x[:, 1:3]), imputer has marked the cell to be transformed is (1,5) as there are two columns it is looking at Age and Salary but if put only x on the left side, then (1,5) refers to Age 40, while imputer is expecting it to be a Salary column. 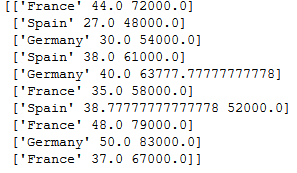 Categorical data is any data that is not numeric. Think of it as attributes of an object. Ex - If I am observing cars on a freeway and noting down the speed at which the car is driving and the color of the car. The cars may have different colors such as red, green, blue etc. I can only observe them but cannot do anything else with them like add, subtract, find mean or anything. However, a machine learning algorithm may see value in finding a relation between dependent and independent feature. The algorithm can only make use of item if it is defined in numbers.

One way to define them is by assigning them numbers ex- Red =1, Blue =2 and so on.
In our current example, we have a categorical data - Country. To convert or encode as it is called in ML, we will again use a library from Scikit

The above code uses LabelEncoder class to encode the values of the country. Here, France =0, Spain = 2, Germany=1
There is however a simple problem here. 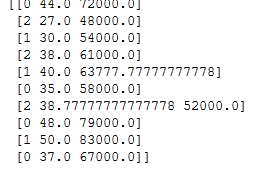 #####Problem:
The models are based on equation. Since the LabelEncoder here, has assigned them values 0,1,2, the equation would think that Germany has higher value than France and Spain has a higher value than Germany. This certainly is not the case. These are supposed to be treated as observational values. Example - Picking on our earlier example of observing car speeds and color. If we use LabelEncoder for encoding car colors, the model may come back and say that A red Prius will always be faster than a White Ferrari

To get over this problem and use category as markers, we will use another class which will create dummy encoding and this gives equal value to all categorical data. It does that by creating a sparse matrix. 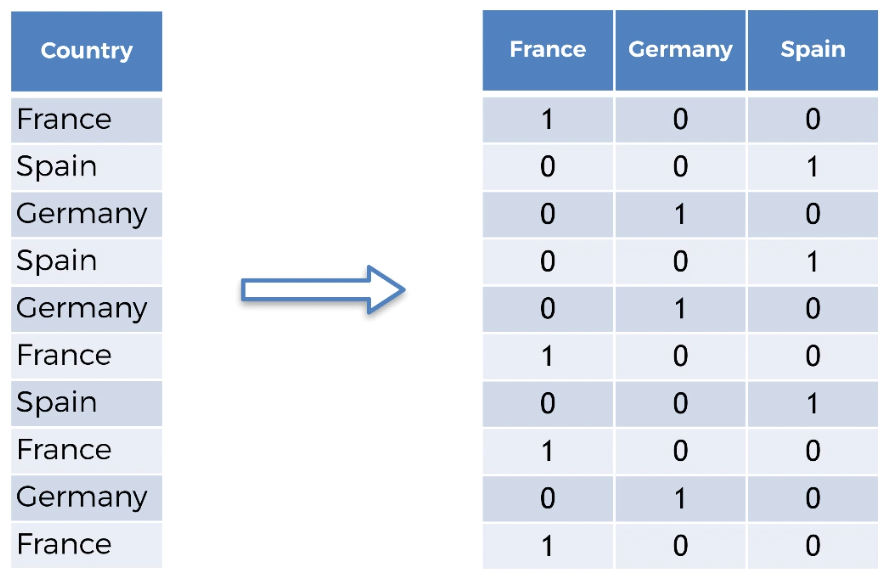 So after dummy encoding, the complete sparse matrix of x looks like this

So now let’s convert the dependent column Purchased as well. However, we do not need to use dummy encoding as there are only two variables and that it is a dependent variable.

To split a dataset into training and test set. We will use another class called train_test_split, which returns 4 different values - Training_X, Test_X,Training_Y, Test_Y

The data is now split into 8 and 2 observation. 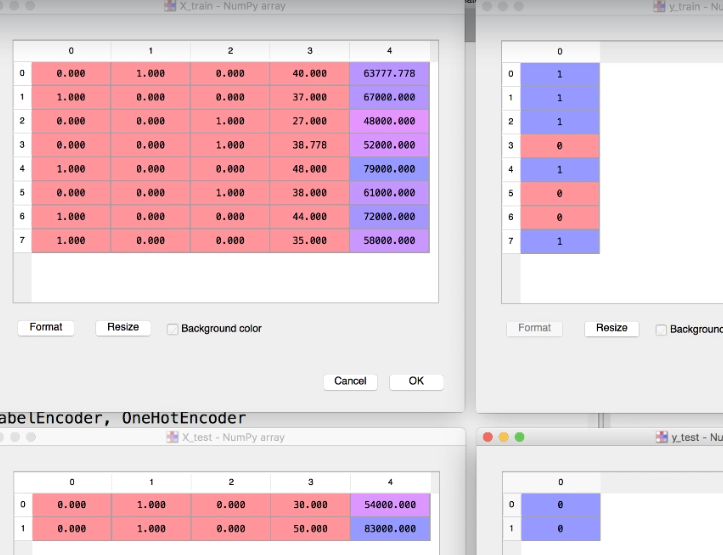 If you look your dataset and pay attention to independent features Age and Salary, the range varies for Age between 27 - 50 and Salary between 48000 - 83000. When an equation is created, the distance between two dat apoints is huge and the values can be skewed because one of the columns have 27 for age and 83000 for salary. 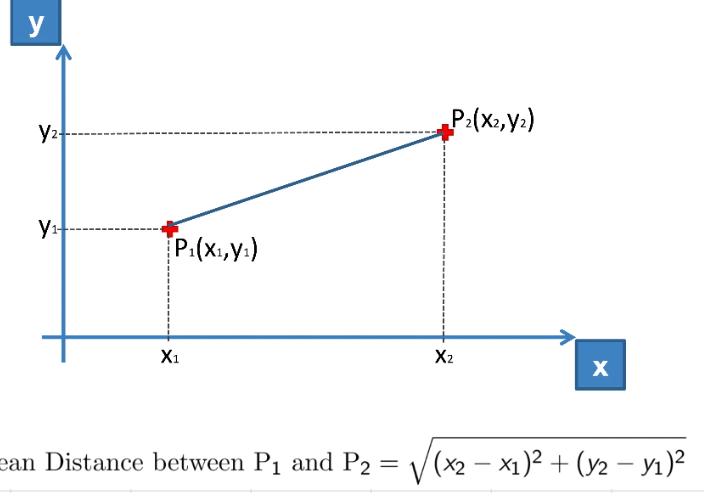 If you are from statistics field, you probably are already familair with standardization or Z-index etc. Above is the two way to calculate the standard range which will always give us a value between 0 and 1

NOTE: We are not fitting and transforming the x_test because it is already fitted based on xtrain so that they are now on the same scale. If we would have used fit_transform on both test and train then their scale would have been different say one could between -1 and +1 while the other could be on -3 and +3

That’s all for the first series. Stay tuned for next series.