In the previous post, we learnt about a P-Value, a prerequisite for learning Multiple Linear Regression.

Business Problem: In this series, we will take a look at a dataset of 50 startup companies. 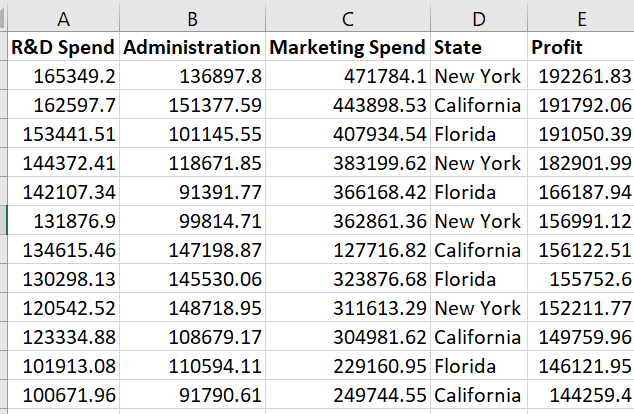 A venture capitalist has hired you as a data scientist and wants you to help him select which type of company he should invest so that he can make the most profit. You need to review spending on R&D, Admin cost, marketing cost and location to make the decision

How to get the dataset?

What is Multiple Linear Regression?

In the second post on linear regression, our equation was simple and straight-forward

The equation would also be something as simple as that

Steps to solve the problem?

Take a closer look at dataset. You will notice that all the Independent Variables, except State, is numerical. The variable State is either California or New York. From our first post, you would know that this type of data is called categorical data. We should always convert categorical data into numerical data to avoid bias and find if there is collinearity between Profit and State. Collinearity is just a fancy way of asking - “Is there some relation between Profit and State?.
When you convert a categorical data to numeric data, the new column is called Dummy Variable. So as we learned from our first post, we should convert it to a sparse matrix.

*Do you need two columns to represent New York and California states?
The answer is No.

It is easy to derive from the above screenshot that if New York is 1 then California by default would be 0 and vice-versa. So this actually works like a switch which can have only 2 states 0 or 1.

Important tip: You should never use all of your dummy variables in your Regression column. They should always be 1 less than the number of values.

Without dropping column my equation would look like this

After Dropping one dummy variable

But what is wrong with using all the dummy variable?

When you use both the values, your equation would be something

If we do this then we will introduce multi-collinearity, where the algorithm will not be able to able to distinguish the effect on Price. This is because D2 is always equal to 1 - D1. The algorithm will then try to predict the effect of D2 over D1 and would think that there is a relation between Independent variable as well.

Forward Selection: In forward selection, you start with linear regression using every single variable. You will end up with n simple linear equation. Next, you chose the one with the lowest P-Value. This is your starting equation. Y = m0X0. Next, you pick one variable again and create an equation with two variables and out of n-1 possibilities again chose the one with the lowest P-value. The process continues until we don’t have any variable that is lower than our selected Significance level.

Score Comparison: In this model, you create all possible combination of the equation, compare the performance using say MSE(Mean Square Error) and use the one with the lowest MSE. That is an insane amount of possible equation. For Example - A model with 10 variables will have 1023 possible combination.

Note for the purpose of brevity and sanity, we will be using Backward Elimination model to solve this problem. Also, because this model is fastest and we will still be able to see how the step by method works.

We will now start the calculation using the process that we learnt in the first post of this series. If you remember from Linear regression post 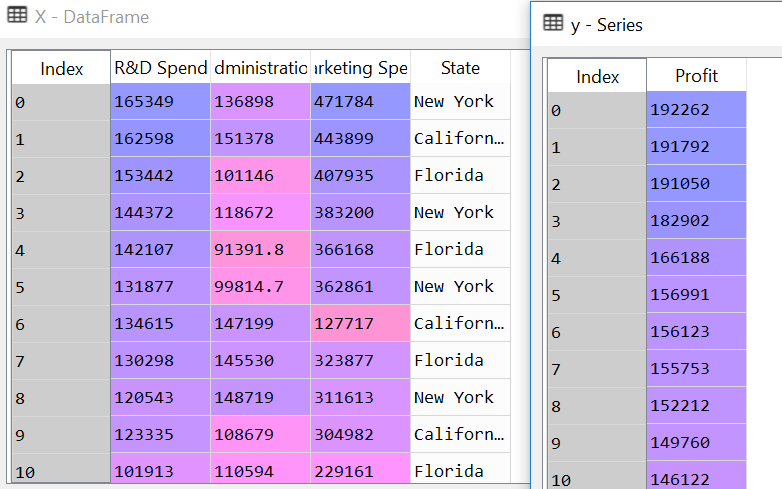 Next part of data processing is to find if there is any missing data. If there is missing data then we need to use Imputer to fix the missing data. To do that we will first check the data description, then try to get a count of missing values in the dataset

Currently, there are no missing values in the dataset hence the result of num_emptycolumns.

Moving on to the next item in the data clean up is taking care of categorical values in the State column. 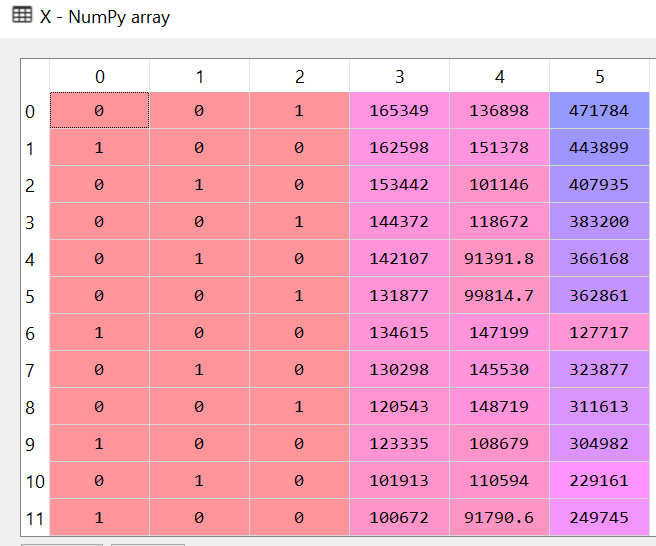 Hey, what about all the talk about keeping n-1 categorical items?

So you are right to notice that whatever we did will lead us directly to the dummy variable trap. I fell into one when I was trying to learn it. So how do we fix it? If you have been thinking about just crossing out one of the columns as we did in the pic few scrolls above ……. you are right!!! That’s exactly how we are going to fix it.

Now divide the data in training and test set

Now that we have cleaned up our data, we can train our data. We are not going to do any feature scaling here, because the library and class that we are going to use, will do that automatically for us. We will use the same LineaRegression class that we used in the linear regression post.

The above code trained our data. Now we need to check how does our model score or how good is it at predicting the data?
To Predict we just need to call the predict function. 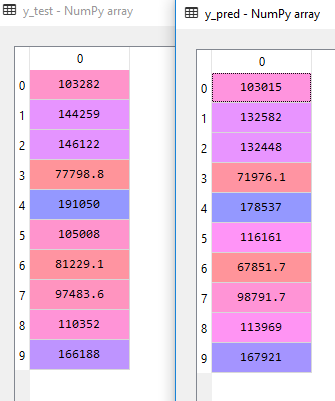 You can see that the predicted values y-pred is pretty close to y_test. Some of the rows do have a significant difference and the numbers may look far apart but the others are pretty close. So how close are we? How confident are we that the trendline would fit closely. To answer this we need to look at our training and test score.

The above score tells us that our model has 95% and 93.5% accurate for training and test data. This not bad.
One last thing that I learnt was that if someone asked me how do I calculate the future values that may come up? To do that we need to get the co-efficient and intercept of the regression equation. The regression equation as discussed earlier would look something like this -